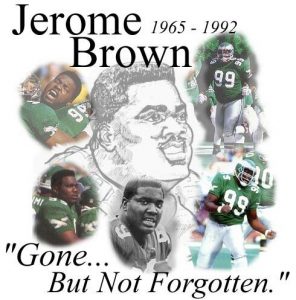 Hernando High School has started the Jerome Brown Project.  The project is to raise $1.4 million dollars to put an artificial surface on the football field that will be named after Jerome Brown, place a statue of the former Leopard great at the field and upgrade the weight room that is named after him.  Jerome Brown was a Parade All-American for the Leopards as well as an All-American at Miami, first round draft pick of the Philadelphia Eagles and a Pro Bowl player for the Eagles.

The venue for football and soccer games will then be Jerome Brown Field at Tom Fisher Stadium. There is currently a vote for what style field it should be. Below is the link for the first round of voting. We will select a final four and have a revealing in June for the winning field.

Varsity Only
6:30 pm
View All Events